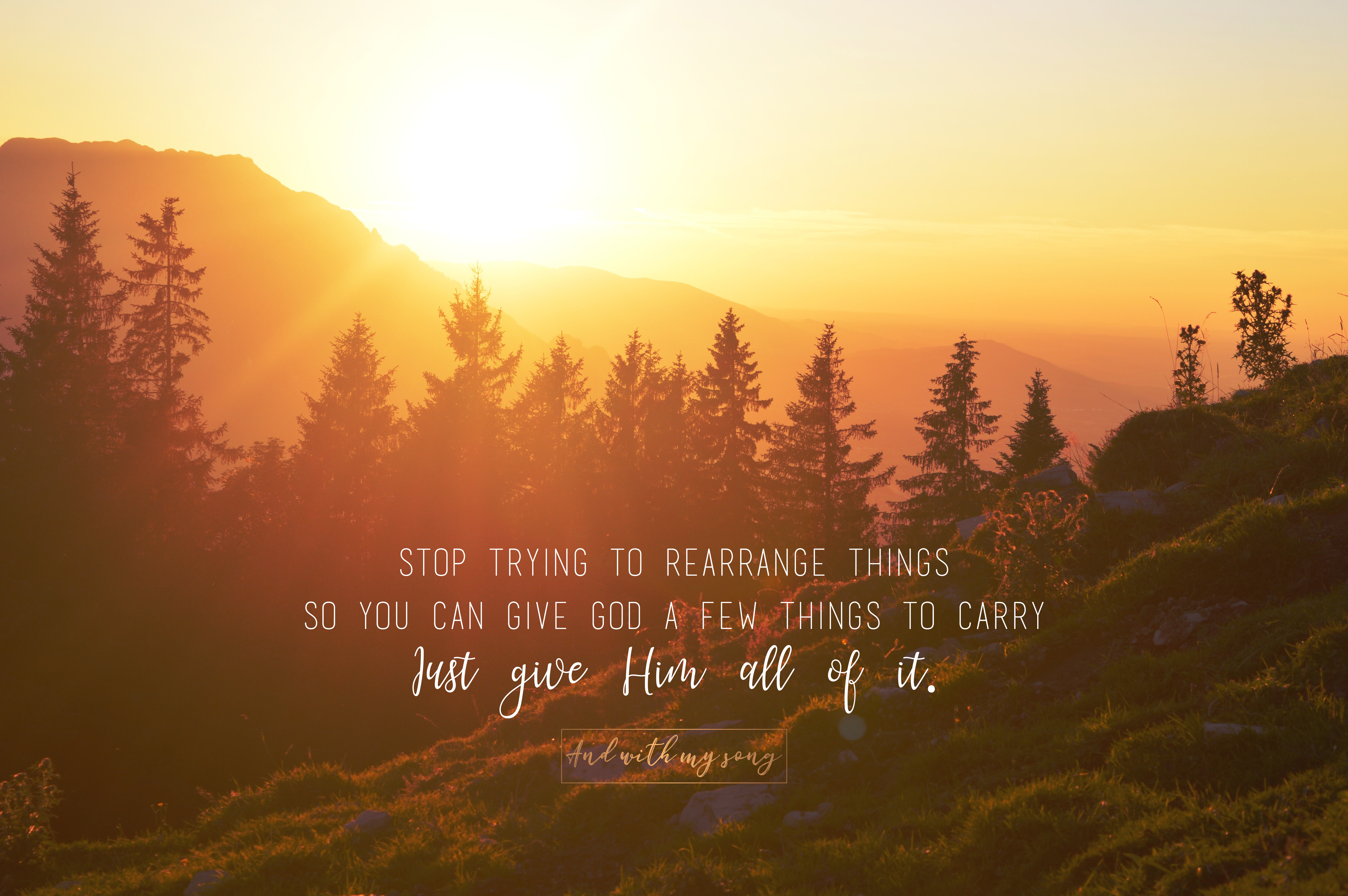 We’ve all seen the funny memes about carrying all the groceries in one trip. It’s funny because it’s true.

What’s not so funny, though, is we try to do that in life too.

It seems like you hardly ever carry just one burden. Most of the time, it seems like we are carrying the weight of the world and it’s usually because we are. One heavy burden on top of another one. They get heavier the more we pile on.

I Peter 5:7 “Casting all your care upon him; for he careth for you.”

Matthew 11:28-30 “Come unto me, all ye that labour and are heavy laden, and I will give you rest. Take my yoke upon you, and learn of me; for I am meek and lowly in heart: and ye shall find rest unto your souls. For my yoke is easy, and my burden is light.”

Why is casting and coming so hard to do when we’ve been given such wonderful promises? I’m cared for and because of that Jesus has said I can cast ALL my cares on Him. He says I can come to Him, with all my burdens and problems and He WILL give me rest. So why don’t I do it more often than I do? Why do I find it so difficult sometimes?

Well it brought to mind the groceries. Ain’t nobody got time to make two trips. Right? So, instead we load ourselves down until we can hardly move for all the grocery bags we’ve hung on our arms. It doesn’t just make it hard to walk, but it’s hard to close the trunk, it’s hard to open and close the door to the house, and then we have to somehow unload all those bags onto the counter. With what, our third arm?! But none of that matters, because we made it in one trip!

It also made me think of leaving church. On a typical Sunday morning, we have 5 bibles, a thick songbook, a Sunday School folder, and a (very) large purse. Haha. And usually a bunch of little things the kids brought but haven’t taken out with them. The kids head outside with their friends. James is our church treasurer and while he does the money, I usually get left carrying all those things out to the car. And you guessed it, all in one trip.

Some people would see me and offer to help but you know what I’ve found? It’s easier to just carry it all than to try and give someone 1 or 2 things to carry. Because I have carefully arranged and balanced everything. Sure, it gets awful heavy from the pew to the parking lot, but something might slip or teeter if I tried to lighten my load by giving some to someone else.

Every now and then, I’d get caught talking to someone on my way out. And by the time I finally headed outside, my arms were about to fall off. And James would already be outside waiting for me. And you know what he would do? Without asking, he’d just reach over and take it all from me. He’s bigger, his arms are stronger, he can carry more than I can. And he has no problem doing it, until……

I don’t let him take it all.

If I try to help him by holding onto a few things, books start to slip and things can fall to the ground. But when I just give it all to him, it’s so much easier.

See where I’m going? We get so burdened down with so many things!! And they get so heavy. But we have too much to do to stop and cast it all on Jesus. We’ve got to go here and do this and fix that problem. We don’t have time to sit in His presence and cast all our cares on Him, we’re too busy to make the “second trip”, if you will. And then everything else we try to do is that much harder. Because we’re under such a load.

And sometimes, even though we do make the time, we don’t want to give it all to Jesus. He can have this little problem, and maybe this one too, but not all of them. It takes too much effort to just let Him have it all. We think it’s just easier to try and carry it all our own. We have carefully stacked our load until we think it’s easier to carry.

Today, let’s stop trying to rearrange things so we can give Him a few things. Let’s give it all to Him. All the pain, all the heartache, all the worries, all the problems. ALL of it. Because He’s big enough to carry it all. His arms are stronger than ours. He can take everything from us and He won’t be too burdened down by it all. No matter what or how much we’re carrying. He’s promised us rest, a lighter load, an easy yoke. Doesn’t that sound wonderful? To not have to carry all that stuff around with us every day?

Casting and coming should be constant on our part. Burdens and trials never stop. So why should we?

Anxiety Part 1: What is it and how does it happen?