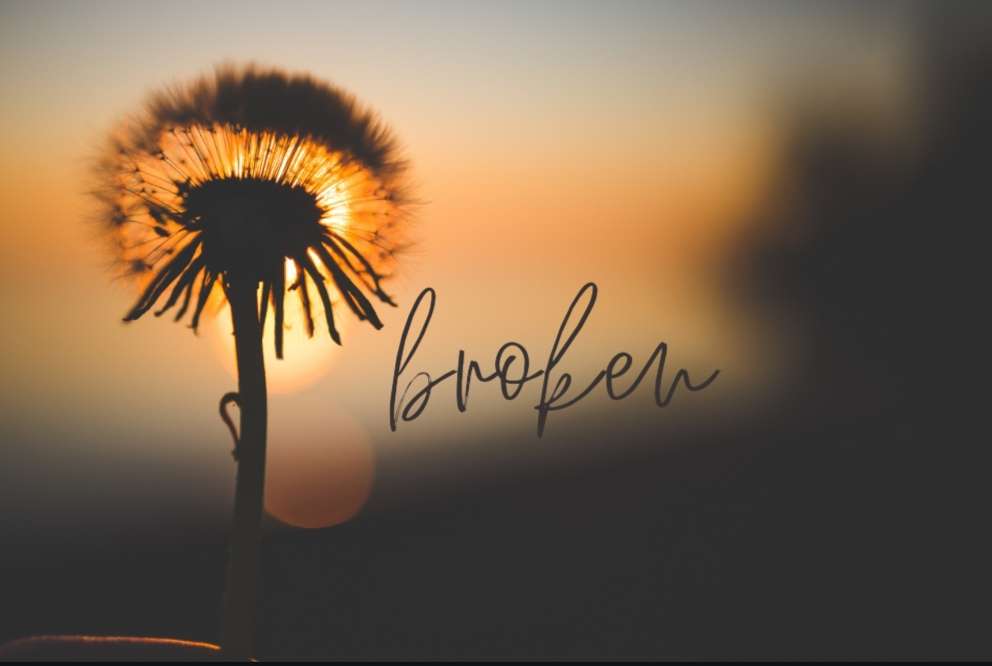 There was a song that my siblings and I would listen to growing up called God Uses Broken Things. The chorus went like so:

It had a catchy little melody and we enjoyed singing along to it.

But we never really understood the words.

I think it takes being broken to understand.

I was thinking the other day of the stories in the Bible that talk about things that were broken.  And how amazingly, when tied together, they all show us God’s purpose in using brokenness.

Brokenness causes:
1. Our will to bow

In Luke 5:1-11, we see here that Jesus tells Simon (Peter) to launch out into the deep sea and let down his nets.  Peter was a skilled fisherman; he knew what he was doing.  He knew the best places to fish, the best time to fish.  And he’d been out all night fishing.  With no results.  And now Jesus was telling him to go back out again and not just let down one net, but multiple nets.  We can see Peter’s arrogance and disbelief in the statement, “NEVERTHELESS at thy word I will let down the net.” He still made his argument heard, and despite being told to let down his nets, plural, he made sure to let the Lord know he’d let down one.  Just to appease His request. Because Peter really didn’t believe that he’d catch anything.  His will (his net, too) had to break.  But God used this broken net in Peter’s life to launch his discipleship.  We see Peter on his knees before the Lord by the end of this chapter.  And Jesus did indeed make him a Fisher of men.

In Judges 6-7, we find Gideon. I love this story because Gideon is so much like us.  He tells the Lord that he is poor and the least of all his house.  But the Lord gives him a promise.  That still isn’t enough for Gideon, so he asks for a sign.  And God gives him one.  But Gideon is still so afraid, that when God tells him to throw down his father’s altar of idolatry, Gideon does it at night, when no one sees.  Then, Gideon asks God to prove one more time that He will really save Israel by Gideon’s hand.  And God does.  Twice, with the fleece.  So Gideon gathers his army.  A pretty big one.  But God cuts it down to size, two times.  By this time, I’d have been scared to death to face an army that the Bible says was without number, as the sand by the sea side for multitude.  But even more so with such a small army helping me.  Three hundred men, with only trumpets, pitchers, and lamps as weapons. But what a victory God procured for Gideon. God used weakness to testify of His strength. As the pitchers were broken, God delivered.

In the John 12, we find Mary with her costly ointment. There’s a lot to get into here, but we know that it was very precious to her.  I can imagine the courage it took to come before Jesus in front of everyone and sacrifice the most precious thing you own to anoint the Savior. The humility it took to wipe his feet with her hair.  In the Mark 14 account, it says the ointment was held in an alabastor box, “and she brake the box, and poured it on his head.” If she had just presented Jesus with the gift, that would’ve been a sacrifice in itself.  But for the aroma to fill the house, for others to take notice, for her to anoint the Lord, the precious box had to be broken.  Her worship, along with the sweet smelling ointment, poured out to all those around her.

Sometimes we can look around at all the shattered pieces and try to sweep them all back together.  Hold them in one place.  Walk around, with arms full of shards of glass, enduring the pain of the cuts that slice deep, mourning the loss of what we think is just wasted.  Of no use or purpose anymore.

When God is standing there, waiting for us to let Him use the broken pieces.

God gave Peter a multitude of fishes.
He gave Gideon a mighty victory.
And He gave Mary a memorial of praise.

Broken things look differently to Him. Our will has to bow, but our weakness can testify of the great things God can do.  We might have to sacrifice what we hold dear, but if we allow our worship to pour, God sees what it costs us.  No one else may, but He does.

And the blessings reaped from being broken, if God holds the pieces, outnumber even the tiniest of shattered fragments. So Someone Else Can See