0
Stories For His Glory 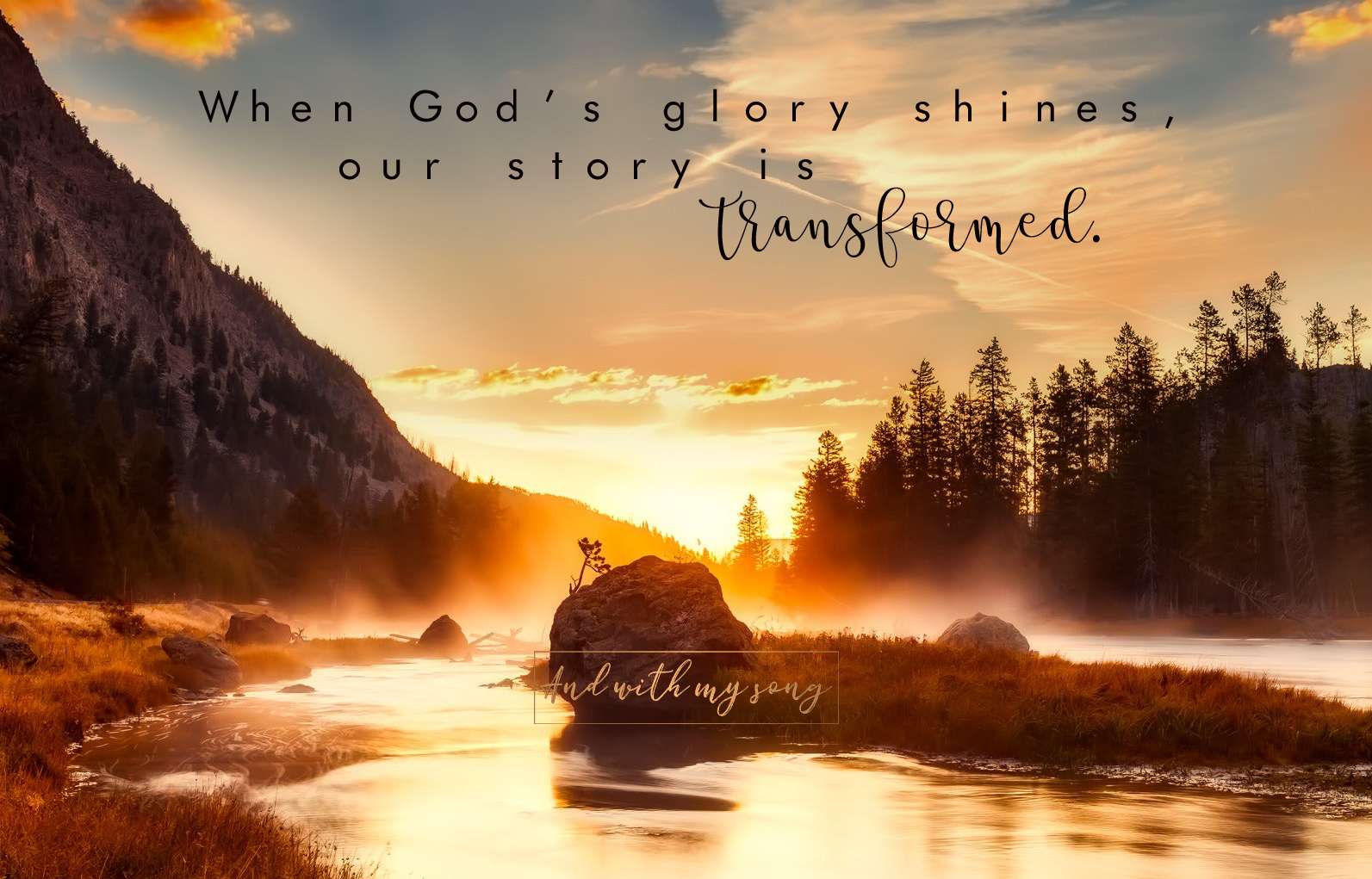 I’m so excited to start sharing these ladies’ stories with you and how God has used them to help me. I PRAY that they will be an encouragement to you as well.

Today’s post is an introduction to the series “Stories For His Glory”. I was praying this morning and asking the Lord why sometimes we can’t always feel His presence in our lives. Sometimes, the circumstances are just scary. But the Lord reminded me that His presence is still there, even in fear. So I started reading all the “Fear not’s” and “Be not afraid’s” in the Bible. And I found something interesting. There were times that people were standing right beside the Lord and He told them to not be afraid. He was in their storms, in their devastation, their worry, their trouble. And yet He still had to calm their heart. But some of those verses pointed to God’s glory actually shining. And I’d like to share a few with you.

We find one instance in Luke 2. One of my favorite passages!! The birth of Jesus. “And there were in the same country shepherds abiding in the field, keeping watch over their flock by night. And, lo, the angel of the Lord came upon them, and the glory of the Lord shone round about them; and they were sore afraid. And the angel said unto them, Fear not: for, behold, I bring you good tidings of great joy, which shall be to all people.” Luke 2:8-10

Can you imagine their fear? It was night time, they were alone out in a field and all of a sudden the night sky lights up with a loud voice booming from heaven. We know that it was good news and that it was an angel and that it was God’s glory shining down. But in that moment they didn’t know that. All they knew was fear. They were SORE afraid. Can you imagine God’s glory shining around you? If you read on in the story you see three things happened. They saw Jesus, they told everyone, and they left glorifying and praising God.

The next instance we find in Matthew 17. The Transfiguration of Jesus. Jesus took Peter, James, and John up to a mountain apart from everyone else. And there they saw Jesus transfigured. (Transformed into something more beautiful or elevated.) Vs 2 says “And {Jesus} was transfigured before them and his face did shine as the sun, and his raiment was white as the light.” Vs 5-8 “And while he {Peter} yet spake, Behold, a bright cloud overshadowed them: and behold a voice out of the cloud, which said, this is my beloved Son, in whom I am well pleased; hear ye him. And when the disciples heard it, they fell on their face, and were sore afraid. And Jesus came and touched them, and said, Arise and be not afraid. And when they had lifted up their eyes, they saw no man, save Jesus only.”

I can’t imagine what it would be like to see this. I can’t imagine how Jesus could be transformed into something more beautiful, but He was. God’s glory was shining on Jesus and it surrounded those disciples on that mountain top. What an amazing experience! But in that moment all they could feel was fear. That is until Jesus touched them. Told them not to be afraid. When this first happened two other people appeared with Jesus. How fearful to see someone appear out of no where. But when Jesus told them not to be afraid and they lifted their eyes, they only saw Him. The same three things happened here, when God’s glory shone. They saw Jesus, they told everyone, they rejoiced. Jesus told them not to tell anyone until after he was risen from the dead. The disciples didn’t really understand all of that, but if you read the accounts of what happened after Jesus arose, his disciples did run and tell everyone and they rejoiced that their Savior was risen indeed!!

The last instance that I want to share with you is found in Matthew 28. Jesus has died a horrible death and has been buried in a tomb. Early on the first day of the week Mary Magdalene and the other Mary came to the tomb. Vs 2-6 “And, behold, there was a great earthquake: for the angel of the Lord descended from heaven, and came and rolled back the stone from the door, and sat upon it. His countenance was like lightning and his raiment white as snow: and for fear of him the keepers did shake, and became as dead men. And the angel answered and said unto the women, fear not ye: for I know that you seek Jesus, which was crucified. He is not here: for he is risen, as he said. Come, see the place where the Lord lay.” (Luke 24:5 tells us they were so scared, they bowed to the ground in fear too. “And as they were afraid, and bowed down their faces to the earth, they said unto them, Why seek ye the living among the dead?“)

The Bible tells us here that God’s glory was shining on this angel and it was so terrifying that the keepers were literally scared to death. And we know the ladies had to be fearful because the angel tells them to fear not. Jesus had not made any of this a secret. He taught that He was going to be crucified and buried and that He would rise on the third day. But in that moment all those women could see was that their Lord was not there. And that filled them with fear. But because God’s glory was shining on the angel, and they did as they were told, three things happened here. They saw Jesus, they ran to tell someone, they rejoiced. As they are running they meet Jesus. Vs. 8-9 “And they departed quickly from the sepulchre with fear and great joy; and did run to bring his disciples word. And as they went to tell his disciples, behold, Jesus met them, saying, All hail. And they came and held him by the feet, and worshipped him.” Wow!! What emotions these ladies must have had to experience fear and great joy at the same time. I can’t imagine what they felt as they fell at his feet.

As I got to thinking about these three stories I began to think about my series title “Stories For His Glory”. I don’t know exactly what all these ladies are going to write about but I know that in each one of them, at least for me and my personal life, I have seen God’s glory. And I know others have as well. But I’m sure maybe at some point, they didn’t feel His glory during the trial. And that’s where I found myself again this morning. I can’t feel God’s presence or His glory. And just like each person in the story, I am afraid. I can’t tell God’s glory is here, I just know something terrifying is happening. Something that has made me bow to the ground in fear. But if I can make it through, if I can hear His voice speaking “Fear Not”, then like all those people in each instance – three things will happen.

You can be assured of one thing. When God’s glory shines, our story is transformed. Our stories are filled with tears, questions, pain, fear, failure. But when His glory shines, it overshadows us and all anyone can see is Jesus. I wonder if it would be easier, if while we’re facing whatever circumstance that has us so afraid, that we could step out and be an onlooker. I wonder if we’d see a cloud of God’s glory hovering around us. I wonder if that would calm our fear, knowing it’s God! It’s Him! He’s there, surrounding us. Even when we can’t feel it, there is evidence on the outside that He’s there.

Those people didn’t have to obey. But oh how they must’ve been changed because they did. God’s presence can coincide with scary situations. It’s what we choose to let God do; what we choose to do with the fear that decides if God’s glory will shine through us.

I hope this introduction to my series has encouraged your heart as much as it did mine!!

I know you don’t want to miss any story that will be shared here. Follow my blog at the bottom of the page to make sure you don’t! You will be notified via email each time one is posted.

Why did it have to be Gethsemane? – Mrs. Sarah Trent