Focus on the Mystery of Faith 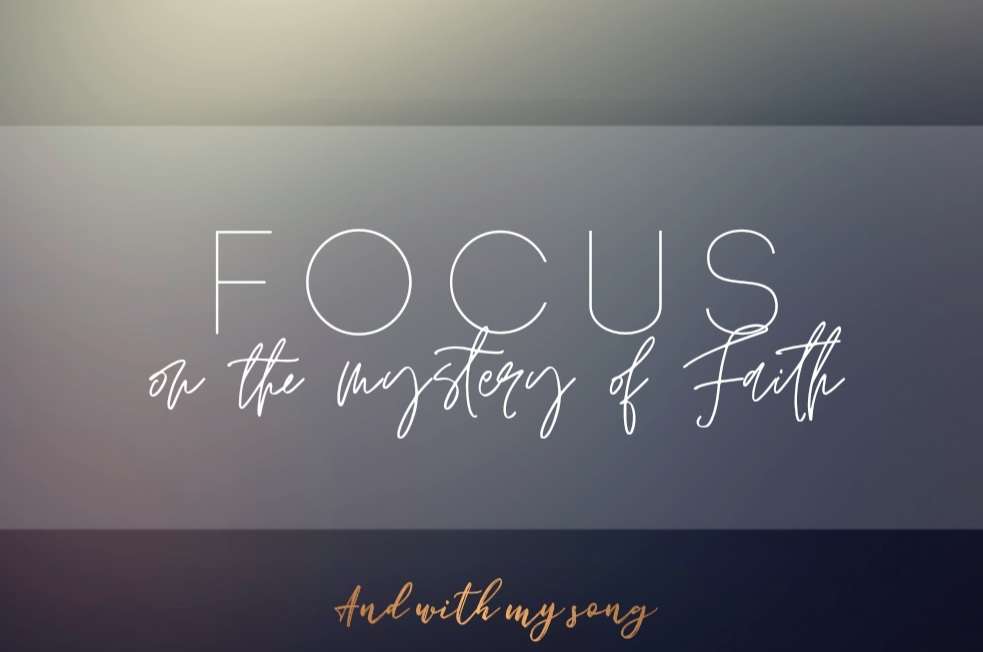 In January, I was asked to speak at a ladies meeting this August. Almost immediately, God put this on my heart. I’m not sure if He’ll give me something else or if the meeting will have to be rescheduled or if everything will go as planned.

But I am sure He wants me to share it today. Regardless of how hard I’ve tried not to.

I don’t know how many times God has brought me back to Peter walking on the water and I know I’ve blogged about it already. But I have different thoughts for today.

Today I want to focus on the mystery of faith’s request. Not me, Faith. But the substance of things hoped for, the evidence of things not seen, faith.

In Matthew 14, Peter’s request is a mystery. And you know what?

Every time I’ve ever done anything in faith, it made absolutely no sense. If it had, it wouldn’t really be faith.

God using dizziness to allow me to write songs does not make sense. Why? Well because it’s really hard to sit at a piano and sing when you’re dizzy.

Promising to praise Him even though He might never heal me, doesn’t make sense.

What has God asked you to do in faith? Are you like me? Wanting Him to make the circumstances a little more bearable before you step over the side of the boat?

Maybe You’ve already taken the step. You know how wonderful walking on water feels? Your eyes razor focused on Jesus, hearing Him say come; the peace that floods your soul even while the storm still rages.

But then the wind picks up more. The howling seems louder than even Jesus’s voice. The waves crash a little harder. The rain feels like tiny knives piercing your skin. And before you know it, you’ve looked at the storm and not the Savior. You’ve started sinking. You’ve failed!

A slip of fear does not mean defeat.

Peter. Bless him. I wonder if the disciples back in the boat were smirking, “Leave it to Peter to mess it up.” I’m sure Peter felt even worse. But JESUS KNEW Peter was going to fail. And still, He reached down to save Him.

How do you suppose Peter got back to the boat though? Jesus could’ve carried him, yes. They could’ve just suddenly appeared back in the boat. But I believe Peter walked back. His fear, his failure, was not defeat.

We will fall. Flat on our faces. We will tell the Lord we’re done. We will fail Him. But we are not defeated. Jesus reaches down, picks us up, and lets us walk back to the boat.

And you know what happened as they got back to the boat? The disciples, who had been with Jesus and seen His many miracles, worshipped Him because of what they’d just seen Him do…. through Peter.

A storm of force does have purpose.

I’ve been in some forceful storms. And if you’re reading this, you have probably already thought about the ones you’ve come through or the one you’re in now. Each one has purpose.

I remember the wind. The waves. The rain. The dark. The thunder. The fear.

But you know what I remember the most about each storm? God’s presence. His peace. His blessings. His hand working through the storm.

Sometimes I’ve been through storms and I’ve felt His presence so close I thought I could touch Him.

And other times, it seemed He was no where near no matter how hard I prayed.

But just when I think that the storm won’t ever end, that I’m not going to make it, that there is no more mercy to be had, that I’ve been broken too much to be put back together, that Jesus will never finish what He started in me, that maybe He will just walk away, He proves me wrong.

If I can just take that one little step of faith, Jesus will take over as soon as my foot touches the water. I don’t have to worry if He’ll be there, if the wind will knock me over or if the waves will take me under. He’s got that.

I just need to focus on the faith. The faith that gets me to Jesus.

I’ve been discouraged lately. On an especially rough day, I had to go out in public for something. And I met a friend. A friend who didn’t know my heart. Didn’t know my discouragement. But God did. Against all precaution and social distancing, she hugged me. (Do we all know how l feel about hugs?!) It felt like a hug from the Lord. She whispered, “You’ve been such a blessing to me, you’ll never know.”

You know what’s been a blessing to her? My songs. My prayers. My friendship.

My songs because I took a step of faith and entrusted them to Jesus.

My prayers because I know the pain of unseen illnesses, untreatable diagnoses, and unknown futures.

My friendship because I asked God to help me help the hurting. Encourage the discouraged.

It all started with a scared, desperate plea that Jesus would take the broken pieces. And the tiniest bit of faith that He could make it beautiful again. Maybe even more so.

I hope this encourages you to take whatever step of faith Jesus is asking of you. Can you hear Him calling you? Come.

“He Proves Me Wrong”
Words & Music by Faith York

*I’ve went back several times to make sure nothing in this post sounds like I am lifting myself up. I’ve tried to retype it, and the Lord says, “Just leave it.” If you don’t know by now that my heart is to lift up Jesus, then you haven’t been paying attention. And with my song will I praise HIM.

Focus On A Gift To Give