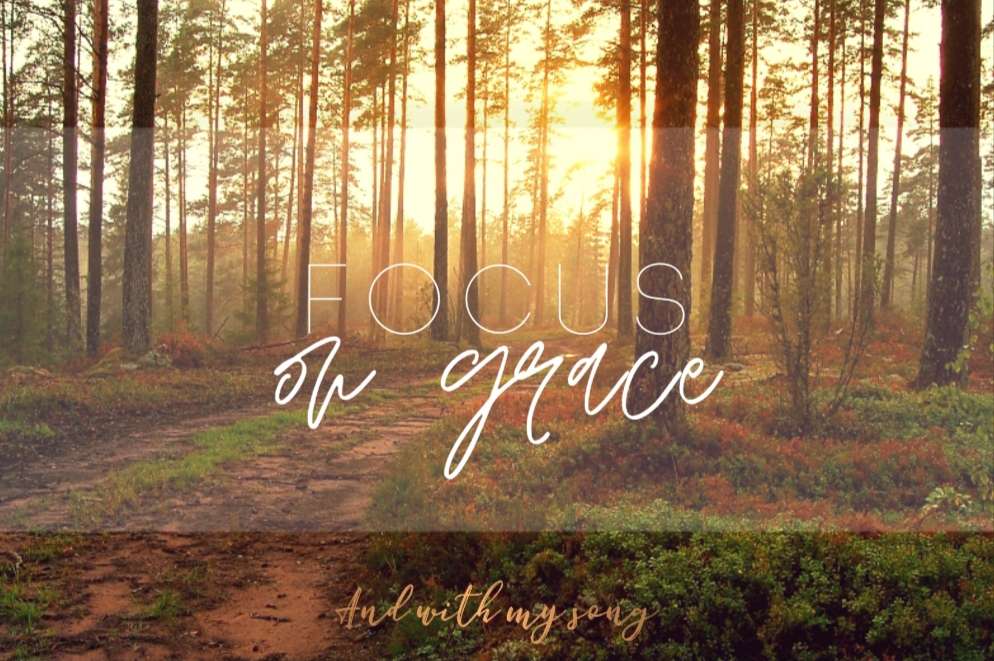 I started writing a post for the new year. I’m not a person that picks out a special “word” to live by at the beginning of each year. But sometimes, there is a word that sticks out to me and I try to focus on it through the year. There are a lot of things I want to change in my life this year, things I want to focus on. And I thought maybe, focus, would be my word. It is 2020 after all. (20/20 vision you know? Focus?)

But every time I’ve tried to find the words for the post, I just feel so….. tired. Exhausted really, of thinking on a new year. But this morning as I opened my drafts, I found this one from back in August. I wrote it, but never posted it. Scared of what people will think. Afraid of making someone jealous. Wondering if people will think I’m just trying to brag. But it’s none of that. This blog was to help me remember. And you know what? I’d already forgotten the grace in this story. I NEED to remember. Today, I NEEDED to read this. And I realized that I NEED to focus on grace.

This post may not help a single person. But I’ve been brutally honest on a lot of posts about my struggles, my emotions, my thoughts. Today I want to be honest about God’s grace.

It’s not always what we expect, but it’s always sufficient.

A pastor’s wife contacted me back in April and asked if I would come speak at her ladies meeting. She said this was their first year doing it and her theme was “Songs in the Night”. She had seen one of our singing videos on someone’s Facebook page. I think she stalked me because she knew about my health issues, our CD and my songwriting. She told me she felt like the Lord had lined everything up.

So to be honest, my first thought was no, absolutely not. In April I still wasn’t able to come to church consistently. I couldn’t stand up for long periods of time and traveling for 6 1/2 hours would kill me. Not to mention I am not a speaker. But I felt the Lord pushing me to trust Him. He brought to mind my song “Before the Storm is Through” and seemed to be saying, this is your step of faith while the storm is still raging. And so, I said yes. I tried to be up front with her and she said even if I had to cancel last minute, she would have a back up. She promised to pray for me, and she wanted me to testify about how my “Songs in the Night” came to be through my struggles.

I could never go into full details about all the ways the Lord lined every single thing up, but I want to hit the highlights.

I actually started feeling a little better through the summer some days. I started being able to sing some in church, sit in church, play for a service here and there. And I began to get a little excited that I was going to feel completely better by August. The Lord had given me what He wanted me to say. And then about a month before the meeting, we hit a wall. But God reminded me again that when life just doesn’t make sense, I know “Who Jesus Is”.

The week of the meeting got here and physically I was feeling worse than I had in a long time. I never once got nervous about speaking (which is amazing in itself), I just worried that I wouldn’t be able to stand up for 30 minutes and speak. We faced so much opposition that week. Bills were piled up, help was scarce at the hardware, things were going wrong left and right and I still wasn’t feeling better the closer we got. Every time my family tried practicing songs to sing, we had to deal with attitudes, weary bodies, dizziness. You name it. I almost messaged the pastor’s wife and told her I didn’t think we were going to make it.

But through all of that, for some reason, I just felt God saying trust me. Trust me! (A friend even came by and gave me a book titled “Trust and Obey” just a few days before we left.) God changed my thoughts to give the ladies. He stripped everything down to just my testimony. And I had it written out on paper. I went back several times, adding all the ways dizziness had touched our lives. All the things I couldn’t do. All the things I missed. But every time I would practice, my suffering was the smallest part of my story. It took longer to tell of all the things God did and was doing surrounding my dizziness. I decided not to even take my notes. I knew my story backward and forward, and I decided to just trust that the Lord would help me say what He wanted. (That’s crazy right?)

I woke up the morning of the meeting feeling horrible. There were things that I had not been able to do in the past that were far less scary than what I was fixing to do. And I had felt much better than I did that morning. But still, “Trust me.”

As I stepped up to the podium to speak, I felt a calm strength and I thought to myself, “This is God’s grace.” Miraculously, I made it through and shared with the ladies how to make it through the darkness with a song. Afterwards, so many ladies came to me, telling me I was on their prayer list. I have complete strangers praying for me! What a blessing their kindness was to me.

We were supposed to sing in the church service the next morning, and honestly all I wanted to do was go home. But again, “Trust Me.”

I struggled through singing, and breathed a huge sigh of relief when it was done. I honestly wanted to just go sit in the truck afterwards or at least stand in the back of the church, but God made me sit still. The preacher got up and guess what He preached on?

I’ve never heard such a perfectly timed sermon. The Spirit was so sweet.

God’s Grace is:
Salvation for the Sinner
Support for the Sorrowful
Sufficient for the situation
Strength for the servant

At the end of the message he told us about a phone call his wife had received in the middle of the night. It was her brother saying her mother had just passed away from a heart attack. He said as he was trying to console her, he could hear her brother still on the phone screaming, “That’s not all!!” Her father had passed away suddenly as well with a heart attack. Both of them within hours of each other. On the day of their funerals, his wife had been asked to sing at the gravesite. And as she stood there, he wondered how she was going to make it. He said she looked over at him and smiled like he had never seen her smile ever before. And she said, “This is what grace feels like.”

Our needs were met in completeness this weekend. Financially, mentally, spiritually, and even physically. God didn’t make me feel good enough to be there. But His grace was greater.

I’ve posted links, not because I want you to see Faith and her family. Oh no!!! I want you to see God and His grace! I want to remember what He did. No one could see the internal struggle. No one may believe that it’s as bad as it is. But I know.

And I want to remind you. That grace saves us. But it doesn’t stop there. Grace carries us through. And it won’t stop there. It won’t run out. It’s sufficient. That word, as it’s used in 2 Corinthians 12:9 gives the idea of grace raising a barrier, to ward off, to avail.

Sometimes we think God’s grace will remove whatever bad thing is happening, that it will stop the suffering. But that’s not what Grace does. It shields. The trouble is still there. But God builds a barrier around us. He wards off the danger, HE avails.

We’ve made it back home and already encountered even more problems. But God’s grace is still carrying us. What He did in our hearts yesterday, is still flowing.

Oh yes He is!! I tend to focus on all the things that could go wrong this new year. All the things that I hope will happen that might not. But I forget that there will always, ALWAYS, be grace. It doesn’t just come full circle, it never ever ends.

So this year, I’m asking God to help me focus on His grace. To find it in the mundane. To grasp it in the struggle. To embrace it in the blessings.

It is folly to think the Lord provides grace for every trouble but the one you are in today. – Spurgeon