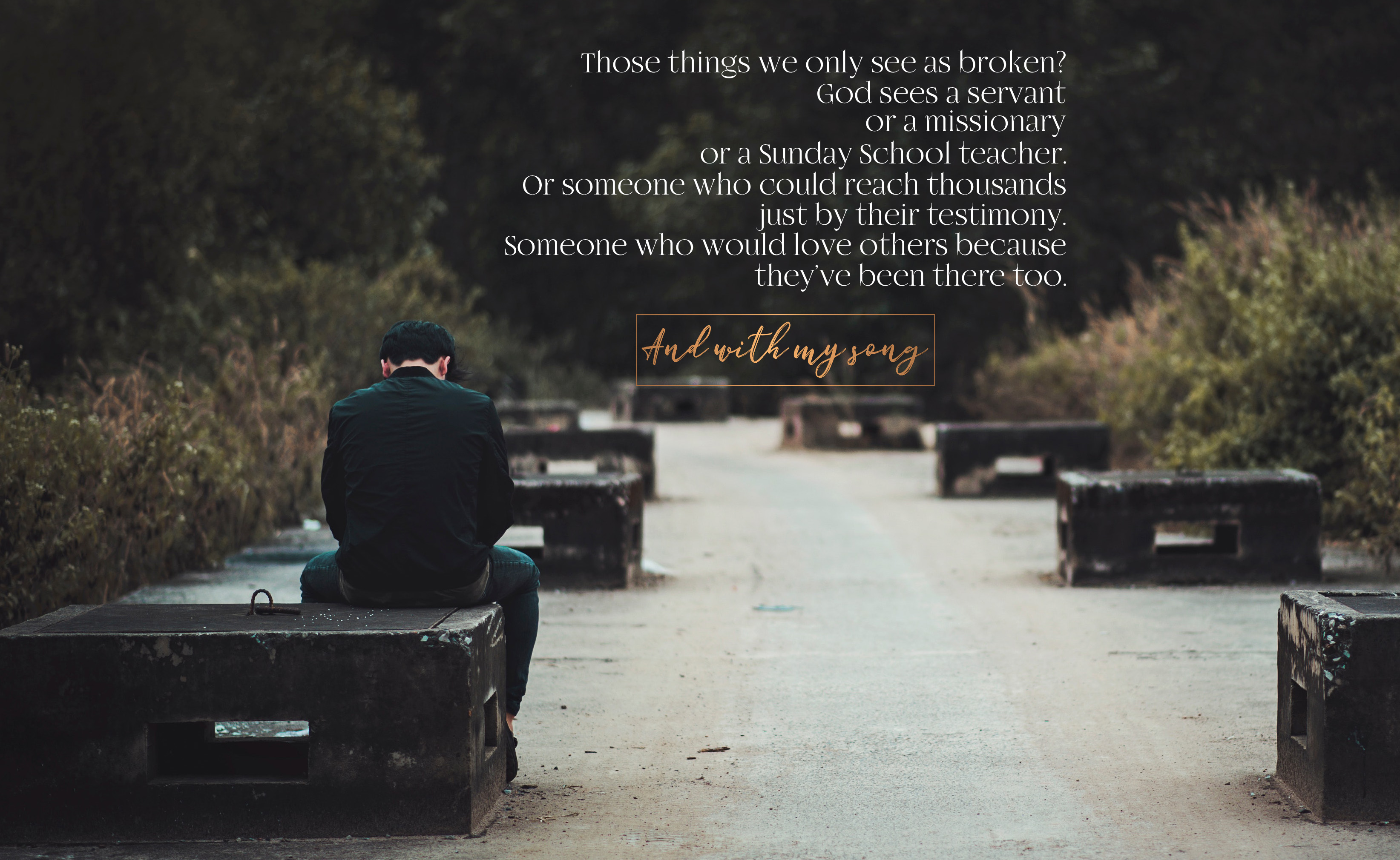 I hate clutter. If something is broken, I want to throw it away. Because it will just take up space. But my husband obviously doesn’t mind clutter. And so my house is full of it. Because even though it’s broken, we still might need it later. That is his philosophy. Sometimes I throw stuff away because I can’t fix it. Most of the time, though, I just don’t want to bother. My husband can fix pretty much anything. And I’ve found that if what has broken is something important to me, something I love and don’t want to trash, I will spend a little more time trying to fix it. And if I can’t, I take it to him and hope he can.

This week we had a Missions Revival at our church. I’ve always been fascinated by missions. I cry almost every time a ministry video is presented. I have several close friends who are on the mission field or going to be, and sometimes I think that I would love to be a missionary. Sometimes. But for right now, God has not called me to go to a foreign land. Probably a good thing, since I treat the people around me like the broken things I don’t have time to fix.

Don’t we all? Christians have gotten so good at being so good that anyone else that isn’t as good as we are is not worth our time. We have it so wrong. People are so broken. We all are so broken. We see their sin and don’t want to get close enough to love them and show them God’s love. In fact we’ve become so pious, that we don’t even want them in our churches. We talk about reaching the lost and bringing them in. But we don’t do anything to really reach them. We think a knock on their door and a gospel tract is enough. We want our church to grow, but we don’t want it filled with drunks or druggies or prostitutes or unwed mothers. We want them to look nice and act nice. Well, weren’t we all at one point something broken? Still are, really…It’s only by God’s grace that we are where we are now. Why don’t we extend to them that same grace?

I had a close friend text me the other day and ask me to pray for her. We’ve prayed together many times about the same thing. But yesterday was just too much. My heart hurts for her because there is nothing I can do. I’ve said all I know to say. I’ve done all I know to do. And as I was praying for her yesterday, I told God just that. “Lord, I can’t say or do anything else to help her. Only you can help her. Only you can fix it.” Of course He’s the only one! And he reminded me that, it’s ok. Yes, her heart is broken. No, I can’t do anything else. But He can. He is the best at what He does. He works best when there is no other fix.

I get so wrapped up in my own problems, I can’t think of anybody else. Days when I can barely hold my own head up above water, that I fail to see the others drowning around me. On their way to hell. Because I’m too busy. Because I just throw broken things away. Because they aren’t important enough to me to take them to the only One Who knows how to fix them. Because I don’t love them enough. God may have not called me to a foreign land, but He has called me to be a missionary. That statement has almost become cliche. “Everyone can be a missionary.” I can see the eye rolls now. “Yeah, Faith. We know all that.” Doesn’t change the fact, though. Just because we know it’s true, doesn’t mean we are living it.

Jesus came to Earth for one thing. To die. What a burden to carry for the 33 years He lived here. How could you possibly think about anything else when you know the only purpose for living in a fleshly body was to offer that body as a sacrifice for the sins of the whole world? Past, present and future. Well, partly because he was still 100% God. But He was also man, and that must have been unbearably hard. But what an example. He stopped and healed people when He was bone weary. When He hadn’t eaten. When He needed water. When He was rejected. When he was misunderstood. When He was made fun of. All through the New Testament, He met people where they were. He went to the ones who were rejected. Messy. Ugly. Hurting. Diseased. Dead. Broken. And He fixed them. More importantly He LOVED them!!

And Jesus answering said unto them, They that are whole need not a physician; but they that are sick. I came not to call the righteous, but sinners to repentance.

People can get so turned off when we try to talk about God. But I think a lot of it is because they’ve had all they can stomach of Christians who talk about loving the sinner and not the sin, but never seeing one actually doing that. When we truly love the sinner, we are going to have to love them while they are IN their sin. And that means loving the worst of the worst sometimes. That means loving the child molester as much as we do the thief. I almost deleted that because no one can stand the thought of a child being abused. It hurts to write that. But GOD loves them. How it breaks His heart to see their sin, but that does not change His love for them. We see Christians bashing the presidential candidates. America is in trouble, no doubt. It is scary to think about, but God is still in control of that. Do we care that they are probably going to hell? That they will spend eternity in torment? In taking a stand against the LGBTQ movement and all the things they are trying to get equality for, we forget to show God’s love. Yes, we need to take a stand! Yes, it is wrong! Yes, it is sin! But they are still human beings. They are still loved by an Almighty God. They are just broken.

After I got that text yesterday, I prayed for my friend all day. And I couldn’t get these thoughts out of my mind. It’s not only the world that is broken, but it’s church members. It’s Christians. It’s our brothers and sisters in Christ. We are too worried about putting on a good show at church to reach out to the people who mean the most to us. Too busy, again, to see their pain. They have been redeemed. But sometimes life still falls apart. And God is STILL the only one who can put it back together.

I wrote another song about 2 friends that were going through 2 very different questions. Both broken. But after I wrote it I thought, there is no way I’m going to sing a song about an abused wife or a drunk husband. What would people think? How is that a song that glorifies the Lord? But that kind of thinking has gotten us where we are today. Because we think we are too good for that to ever happen to us.

We glorify God when we love the broken like He does. When we show them true love; love that doesn’t discriminate. We can’t help someone that doesn’t want help. But how many do we ignore who are just crying out for help, but we can’t see them because their situation is too messy? In the world, but not of it. For most of us that means “In our own little world, only.”

God is the Master Fixer. Broken things are His specialty. What I would just throw away, those things that have no worth to me? He sees a servant.  Or a missionary. Or Sunday School teacher. Or someone who could reach thousands just by their testimony. Someone who would love others because they’ve been there too.

In the end, when we’ve done all we can; said all there is to say – It’s ok; God can fix what’s broken.