He doesn’t have to make His presence known. 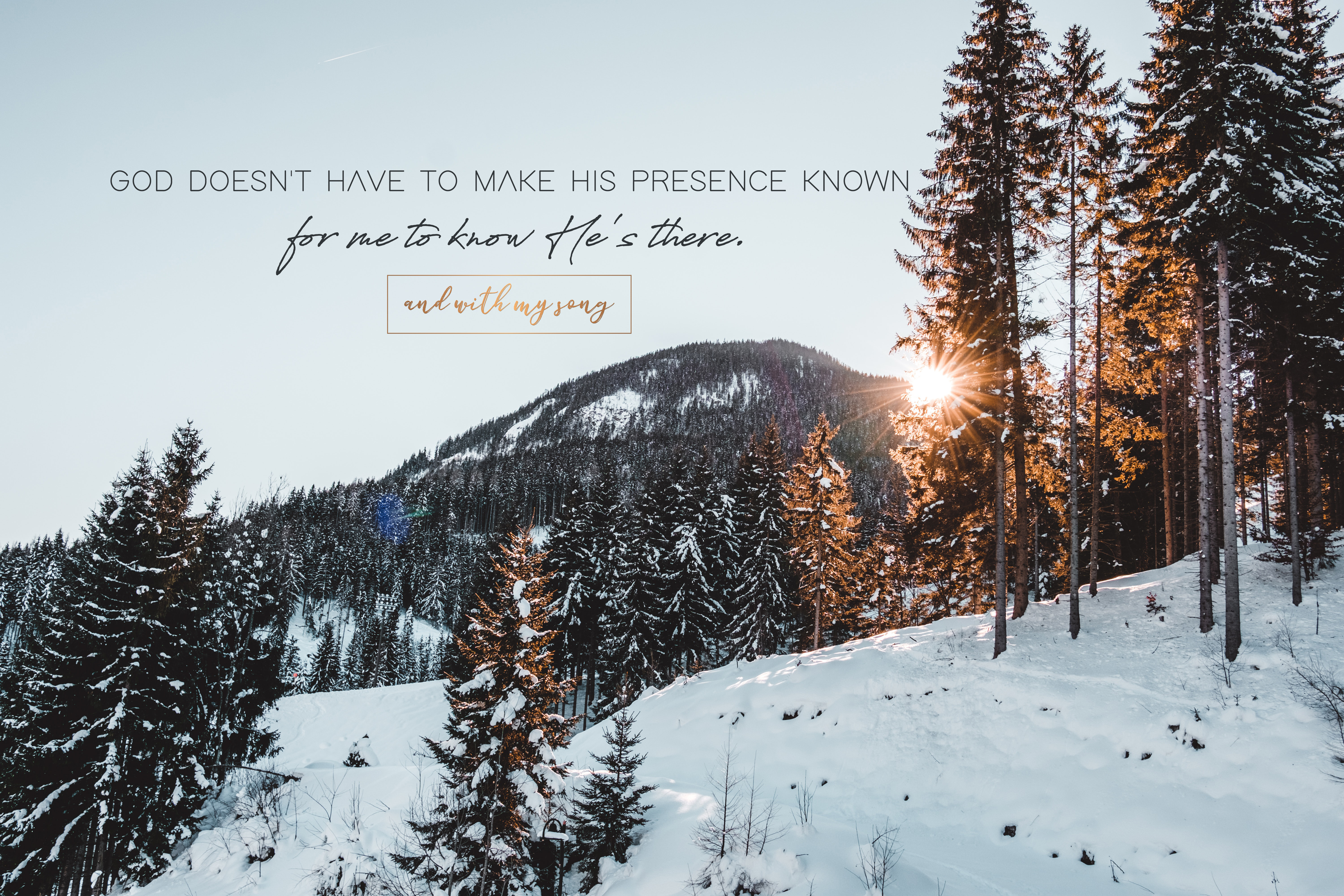 Have you ever NOT felt God? Ever not heard Him? Or seen Him? Ever feel like you are alone?

We all have. I think. I hope I’m not the only one.

Sin can make us feel distant from Him. Because we are. He can’t have fellowship with us when our sin stands between us.

But is sin always the cause for when we don’t feel His presence?

I don’t think so.

I love when God uses the simplest things in my life to make a profound truth come alive. I go to my doctor once a week now. But several months ago, I was going 3 times a week, every week. And each time, I had to lie face down on a table that moves like an anti-gravity chair. My feet are not grounded, so you can lose your sense of balance very easily. But when your sense of balance is already gone, it makes it so much worse. And I was terrified of that table. I would feel dizzy even laying down flat on it. So James would stand at my side and touch my arm. This would give me a point of reference for where my body was in space. More recently, he just stands there. Sometimes he forgets to touch my arm, but he still stands by the table.

I can’t see anything or anyone while I’m laying face down. And even when James didn’t have a hand on me, I still knew he was there. And I could reach for him. Sometimes I would clench my fist or he would just tell by my body language that I needed help and he would remember to touch my arm or hold my hand. And I thought, that’s what God does.

I can’t imagine the pain of losing a child or having cancer or anything that is worse than constant dizziness. But each of us are on our own journey. We are in different places. Some are far ahead, others far behind, some in the middle. But we each have to learn the same lessons. Sometimes a lesson takes longer to learn. I may not have been through what you have, and you may not have faced my battles, but I have felt alone. I have been in a desperate place, wondering where God was, where peace was, where joy was. There were long stretches of time when I truly did not think He was there. I looked everywhere. In His word. In prayer. In wise counsel. And I still couldn’t find Him. What does grace even feel like? What does it look like? What does God’s presence look and feel like in the middle of the deepest, darkest heartache? Sometimes we “think” we know what all those things are supposed to look like. And then when our world gets shattered, so do our thoughts of what we think we should have. How we think we should feel.

What if we are experiencing joy and peace and grace and God’s presence, and we are missing it because it’s not what we expected? We know what peace is. We first experienced it when we got saved. That wonderful, lighter than air feeling of all the burdens and sin being lifted from our heart. It’s unexplainable. But does peace feel like that in a storm? We know how much we appreciate grace when we mess up constantly and yet, God still offers forgiveness. Grace died for us. Grace gives second chances. But what does grace feel like when it’s applied to a broken heart? You know everyone always says you won’t know what dying grace is until you die. Well, what if we don’t know what “fill in the blank grace” is until we are there, in that moment? And what if we can’t even realize what it truly is until we have made it through whatever it was we needed grace for in the first place?

I can’t feel James standing beside me. Especially when he doesn’t make his presence known by touching me or speaking to the doctor. But I know he is.

Hebrews 13:5 “for he hath said, I will never leave thee, nor forsake thee.” He promised us. And He doesn’t lie.

Job 23:8-10 “Behold, I go forward, but he is not there; and backward, but I cannot perceive him: On the left hand, where he doth work, but I cannot behold him: he hideth himself on the right hand, that I cannot see him: But he knoweth the way that I take: when he hath tried me, I shall come forth as gold.” Even when I look everywhere for Him, He knows where I’m going. He sees me. (You know the only place Job didn’t look? Up.)
Lamentations 3:22-23 “It is of the Lord‘s mercies that we are not consumed, because his compassions fail not. They are new every morning: great is thy faithfulness.” He’s faithful. His faithfulness has already proven to be there in everything I’ve faced up until now. This isn’t going to be the one trial where it stops.

But, how do I know for sure it won’t stop?

Hebrews 13:8 “Jesus Christ the same yesterday, and to day, and for ever.” He has never changed, He never will.

Even when I am thrown into the fire and it seems like He does nothing.

Malachi 3:3a “And he shall sit as a refiner and purifier of silver:” He’s sitting beside me, watching, making sure the fire only gets hot enough to do the work He wants.

Those are not just words!!! They are promises I can stake my very life and all the brokenness, heartache and loneliness on.

Sometimes, James will push me. And make me do things he knows I can do even when I don’t think I can. But he doesn’t leave me. He’s still there.

I think about him teaching all of the kids to swim. He stands in front of them with his arms stretched out, telling them to swim to him. And each of our children has thought, “Ok, I only have this much to swim by myself and then daddy will be there.” But if they actually start swimming on their own, he will back up. And keep backing up and they never reach him. But He’s always there. If they get scared or tired, he reaches out and grabs them. If they start to sink, he is still close enough to not let them be harmed. But they will never learn to swim if he holds them the entire time. He has to let go.

Sometimes it feels like God is one of those fathers that just throws you in and says “‘swim”. But we know He’s not. It took months of swimming in floaties before James knew the kids were ready. He made the judgement call based on how they were doing. He knows them. He’s watched them for a while before he decides it’s time. That’s God.

God takes His hands off to teach us. But He is still there. Within arms reach. Watching carefully that we don’t drown. And sometimes, He just keeps backing up so we swim farther. But He never backs up so much that He can’t see that we are struggling. He knows just when to step in, even if we think we are going under.

So today if you are struggling to find Him, remember what you know to be true. Say it over and over to yourself:

God doesn’t have to make His presence known, for me to know He’s there.

You can listen to the song by clicking below: