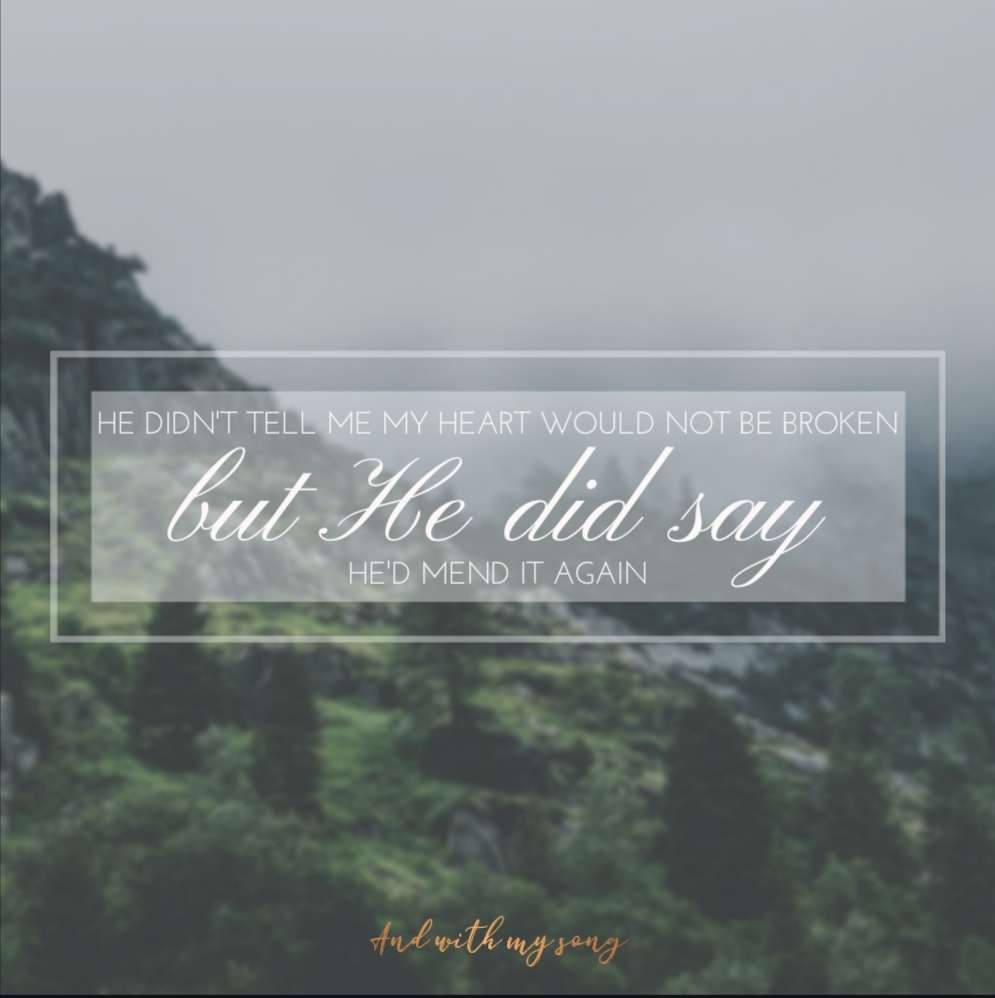 Once again, God has used my children to speak to me.

And once again, it’s about broken things.

And once again, I’m just going to share my heart openly with you.

I used my daughter’s curtains for a wedding last weekend and we just got them out of the car yesterday.

She brought them to me early that morning and asked if I’d put them up for her. I told her I would do it later that evening. Well, she got impatient and tried to do it herself. Only she tore the curtain rod out of the wall. So she decided to enlist older brother’s help.

All of the sudden, I hear something fall over, then crying, yelling, chaos. So I go to the bedroom and she is hysterical because her stool to her vanity is now broken. Brother had used it to step on to reach the curtain rod. Only it broke and he fell. She was upset about the stool and he was upset that she wasn’t upset that he had fallen. And the curtains still lay on the floor.

I made sure everyone was ok and then hung the curtains. All while she is crying, uncontrollably. I told her to put all the broken pieces in a pile and daddy would fix them. But that wasn’t good enough. She followed me around the house, still crying about it.

We got to the laundry room and I asked her, “Has there ever been something daddy couldn’t fix? No. He won’t be mad, He’ll just fix it for you. So stop crying and worrying about it, it’s ok.”

As I’m loading clothes into the dryer, the Lord whispers to my heart, “Are you listening to what you just said? Is there anything I can’t fix?”

I’m so tired of feeling broken. Unfixable. Beyond repair.

See, my daughter didn’t wait on me. And she messed up. And instead of focusing on her brother, who was only trying to help, she just saw what was broken.

She got that vanity for her birthday last year and has sat on that stool day after day. Playing dress up, makeup, doing her school work. It was precious to her. And in that moment, she only saw the broken leg, the shattered wood. In her eyes, beyond repair. Not good for anything now. She wasn’t thinking about her daddy. The one who can fix anything.

I have confidence in her daddy, too. Because I’ve seen him work on things until they are fixed. The stool will show signs of being broken. It might be a little more fragile after it’s fixed. But it can still be used. It will still have a purpose.

And if worse comes to worse and he can’t fix it, he loves the little girl who bawled her eyes out because of her precious, broken stool. He’ll get her a new one. And it might be even better than the last.

Why don’t I have more confidence in my Father? I’ve seen Him work miracles. He reached into the depths of sin to rescue me, so why would I think my brokenness now would be too hard for Him to fix? Why is my focus on the shattered pieces instead of the Savior?

Yes, I’ve watched my precious dreams slip through my hands. My hopes, wishes…I know He can fix this. And if He chooses not to, whatever He does instead will still have purpose. I may always carry the marks of being put back together. But then again, He may give me something new, better and more beautiful than what I was before.

If you’re walking around, worrying about the broken pieces you’ve put in a pile, waiting and wondering if God can fix them – just stop. It’s going to be ok. He can fix it and if He doesn’t, He’s working on something else for you. You might not look the same when He’s done, but you’ll be mended again.

It makes me think of the old Dottie Rambo song, “Promises”:

He didn’t tell me my heart would not be broken, but He did say He’d mend it again.

The Lord is nigh unto them that are of a broken heart; Psalm 34:18

Anxiety Part 3: The words that changed my life

Have I Done My Best?