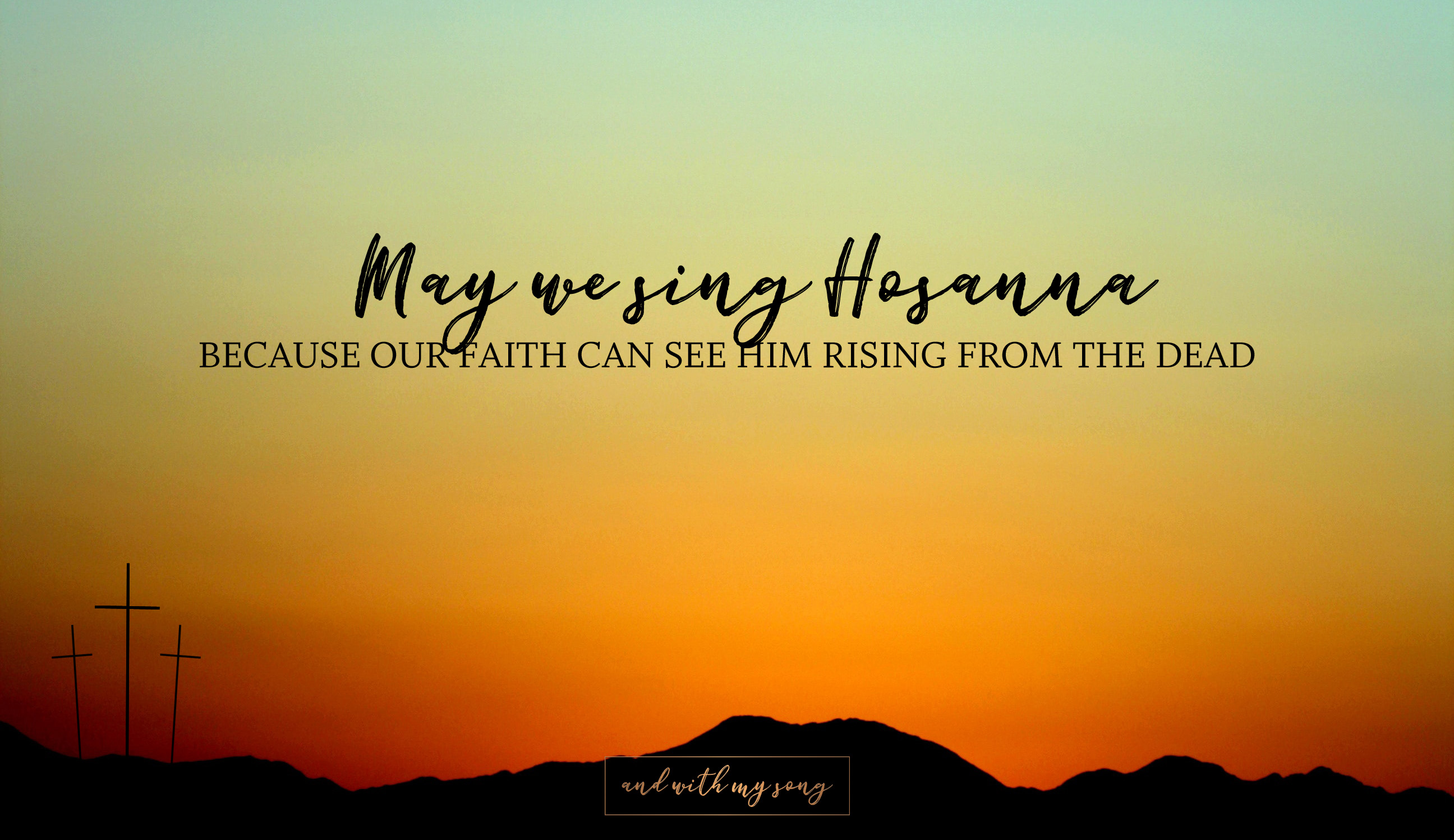 I am so unprepared for Easter this year. It’s this Sunday!

I’ve been reading about the triumphant entry of Christ through the city of Jerusalem.

I remember making Palm branches as a child in Sunday School, learning about the colt Jesus borrowed to ride into the city, and making little tombs out of paper plates.

There are small details though, that you just forget. Like, who were these people that threw the branches on the ground? Why were they so joyful?

Well, these people were the same people who were there when Jesus raised Lazarus from the grave. They came to the feast in Bethany to see Lazarus, alive and well. No doubt some were probably there at the foot of Calvary, too. And that day, (The day that’s celebrated on Palm Sunday) they shouted Hosanna because they knew Messiah had come to save them.

Palm Sunday is a day that’s been set aside to celebrate this triumphant entry. And this past Sunday, I read these beautifully poignant words written by Jennifer Holmes of Jen’s New Song:

“May we not just be Palm Sunday people. Waving branches and praising on the good days. The victory days. The days when we’re in a crowd of happy people. The days that are sunny and hopeful and the picture of a good King is so clear, we can imagine him riding right past us and being able to touch him.
–
But may we be hosanna people. Shouting our adoration, our praise of our King, not just on Palm Sunday. But in Gethsemane, on the dark Fridays. When our King seems distant or seems to have forsaken us. May we shout hosanna when we are the only one and the crowd has dispersed. May we shout hosanna with all our faith, even when our emotions tell us that our faith is misplaced. May we always, on every day, whether sunny and victorious, or dark and full of despair, always shout hosanna.”

And did that ever strike a chord in my heart. Because I am a Palm Sunday Christian.

I love to sing God’s praises when everything is sunny and wonderful and my heart seems to nearly burst with joy from enjoying all of God’s blessings. I know who God is. I’ve seen Him raise ME from the dead. I’ve watched His hand move with perfect timing in my life. And yet, I stand beneath the hillside of Calvary with all hope lost. Yes, it was right to mourn the death of this Man. Some loved Him. Some knew He was who He said He was. But I forget. I forget that He promised this isn’t the end. I forget that if I just make it through the next three days, I’ll get to see Him once more. I forget that He will rise with the keys of death and hell in those nail pierced hands.

How could those people forget? How can I?

Oh, the trials are so hard. So dark and deep and long. We think there will never be a Resurrection Day. This Messiah that was supposed to save us has DIED. What now?

Jesus had prepared His disciples. He taught them, warned them, performed miracle after miracle to show His power to them. He equipped them to be able to deal with this day. The darkest day. Where were the Hosannas this day?

How easy it had been to shout praises on Victorious Day. How difficult it would have been to do the same on Crucifixion Day. After you’ve watched Jesus be mocked, hated, rejected. Beaten so badly that He is now unrecognizable. Struggling to carry His cross. But still not giving up. All for us. To see Him nailed to that cruel, rugged tree. To see His forgiveness in the face of the deepest heartache. To watch Him be forsaken by the only One left who hasn’t forsaken Him already. And finally, to watch Him take His dying breath.

They could’ve sang Hosanna, even though they’d watched the King die in their stead.

They could’ve sang Hosanna if their faith had just seen Him rising from the dead.

I want to be a Hosanna Christian. I want to shout Hosanna, not just on the victorious days, but on the days when defeat is all I see. I want to praise Him through the Gethsemane and Golgotha. Through the dark days, through the death of my hopes. Because He’s already proven that Sunday is coming again. And this time, it’s bringing my Resurrected Savior. I want my faith to see that, before it ever gets here.

You know He had to leave His disciples and loved ones once again. More dark days would come. Horrible deaths for almost all of them. More sorrow, more pain, more tears. But they had the hope of Resurrection Day firmly planted in their hearts. They knew this wasn’t the end. And because of Calvary and the empty tomb, so do I.

I don’t want to miss my chance to shout Hosanna. My dark days are not the end. I want God to hear me shouting Hosanna continuously. Until He comes.

God, help me to not be a Palm Sunday Christian. But a Hosanna Christian instead.

“And the multitudes that went before, and that followed, cried, saying, Hosanna to the son of David: Blessed is he that cometh in the name of the Lord; Hosanna in the highest.” 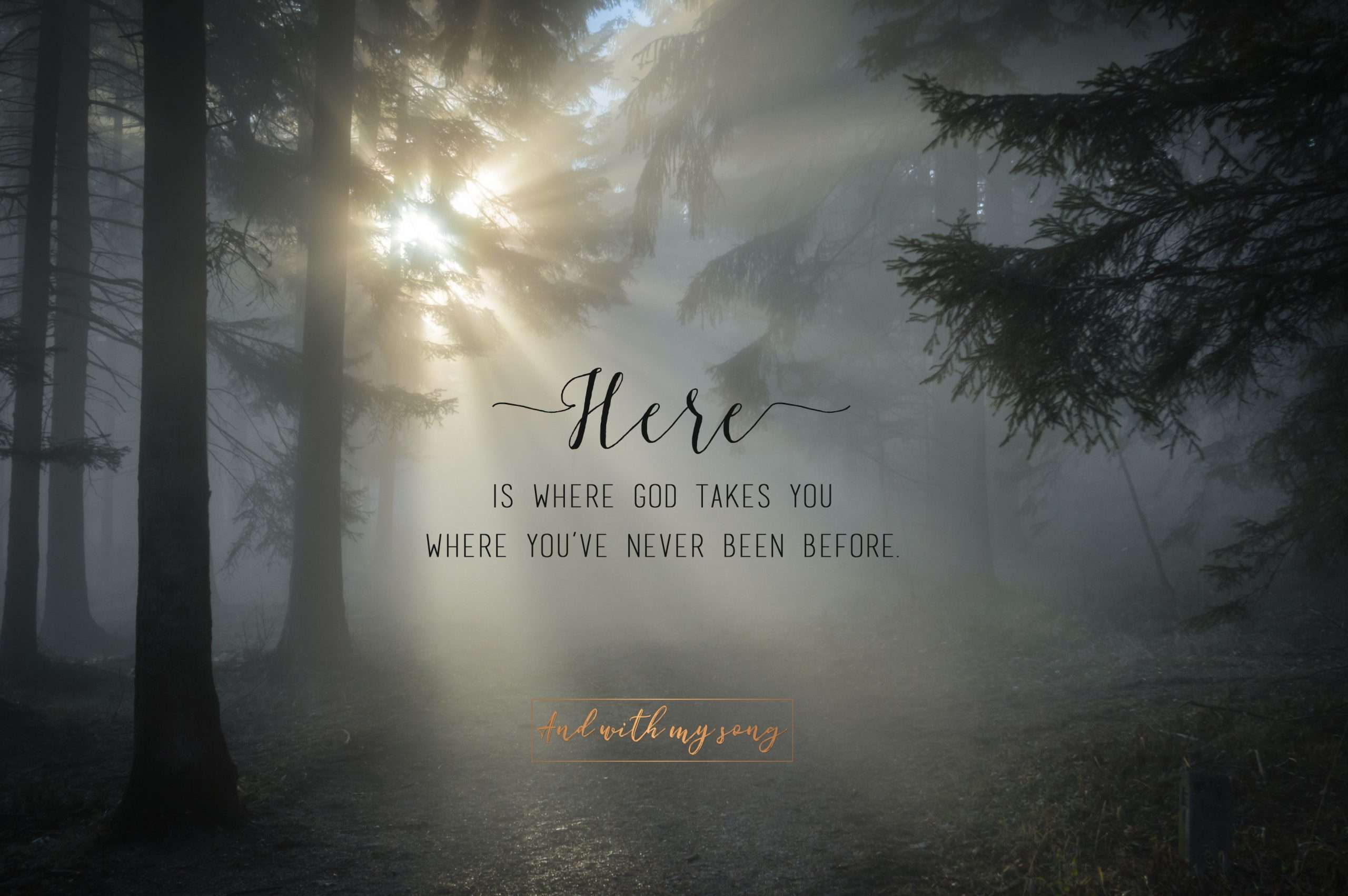