I started studying this out and I love how all the references give us one big picture.

This passage of scripture is referenced to Luke 24:28.

Here, two people are walking the Emmaus road and meet Jesus, only they don’t know it’s Jesus. He had died 3 days prior, and they were heartbroken. Jesus asks them what is going on and they think He is a stranger because He doesn’t know. He began to expound scripture to them and as they got to their village, verse 28 says, “and he made as though he would have gone further.” Why would he go on without them, and not tell them who He was?

This passage is then referenced to Genesis 32:26

This is Jacob’s wrestling match. He wrestles with a man (whom He doesn’t know) until morning. The man says in verse 26, “Let me go”. Again we see here that this man is the Lord, but He hides this from Jacob. Why would He just leave Jacob there, crippled?

There is so much in each one of these stories but we find a common theme. Jesus only revealed Himself for who He was after the disciples stopped Him. Jesus only revealed Himself to this couple after they constrained Him, and their eyes were opened as He broke bread with them. Jacob only realized that He had seen God face to face after He surrendered.

Sometimes we try to go through our storms, our sorrow, our struggle on our own.

But a lot of the times, God calms us instead of the storm because He wants to reveal who He is in our lives.

We know the scriptures, but it’s usually only when sorrow comes that we constrain Him, and really dig deep into His Word, that He communes with us.

Sometimes in our struggles, we push Him away. But when we cleave to Him, He changes us. Jacob left crippled and with a different name. But there is no way he could’ve faced his brother, without the Lord’s strength. And that strength came from the struggle.

And so He stopped. He stayed. And He still does. The storm, the sorrow, the struggle. All were and are allowed to enter with Jesus’ permission. But what happens next is up to us. Today, you’ve seen Him. He’s met you in your sorrow. You may be struggling with what He’s trying to get you to do.

Cry out to Him. Let Him calm you.

Constrain Him. Let Him commune with you.

Cleave to Him. Let Him change you.

It made me think of this song, “I’ve Gotta Get To Jesus”. Oh how He wants us to run to Him. To call on Him. To let Him take our heartache and pain. If we’ll just get to Him, He’ll take it all. 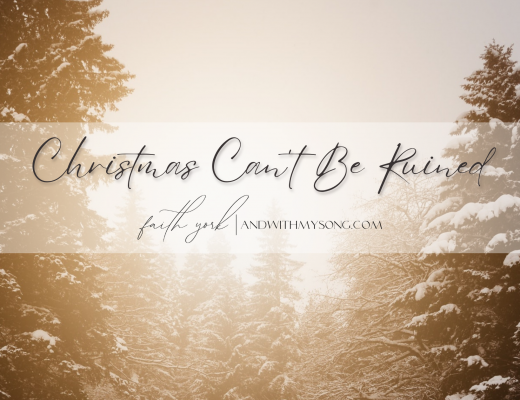 He Knoweth Of Thy Walking Through This Great Wilderness: Mrs. Melissa Moore

Then It's Worth It- Miss MaKenzie Cox